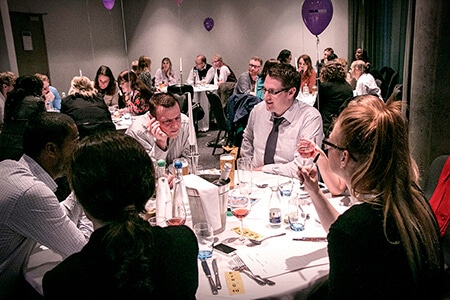 What is the common name for the collegiate church of St. Peter in London? Those who attended the inaugural charity quiz night held by Bailey Wright & Co will know the answer (also found at the bottom of this article!), as it was the question with which compere John Simmit, comedian (and Dipsy in the Tellytubbies) kick started the evening with.

The event, held on 25 September 2014, at the Raddison Blu hotel in Birmingham, was attended by 47 people from a range of professions including law firms and barrister’s chambers, accountants and educational institutions. After a short introductory video about Young Minds, a charity aiming to improve the emotional resilience and mental health of children and young people throughout the UK, the 8 teams battled it out over 10 rounds of quick fire questions.

Before announcing the winners, the raffle prizes were drawn (donated by our generous sponsors). These included:

Amongst the winners was our very own Hannah Ayers who won a meal for four at the Plough in Harboune provided courtesy of accountants Michael Dufty Partnership (MDF). MDF were crowned the winners of the quiz and rewarded with a set of t-shirts designed to their specification.

We would like to thank all of those who supported the event by attending and those who generously sponsored it. It is thanks to you that the evening was such a success. We hope that those of you who did attend enjoyed it and that you will join us at our next fund raiser in the Spring!